Published by LittleWatt on November 24, 2017

For the veterans of The Elder Scrolls V: Skyrim it is well known the Daedric quests are both useful and wicked. For any player with a conscience accomplishing Daedric quests can be tumultuous as completing these quests often require some shady practices. Boethiah’s Calling and The Taste of Death are no exceptions. But I’m here to offer you some peace of mind. You’ll be able to get both Daedric artifacts and offer some much needed justice.

To start these quests you’ll need to locate The Hall of the Dead in Markarth (The Taste of Death) and the Sacellum of Boethiah near Windhelm (Boethiah’s Calling). You will need to be level 30 to start Boethiah’s Calling and will likely be attacked by a Boethiah Cultist. Once you’ve slain this assassin just grab the book off the corpse, which will give you the quest update. Although there isn’t a prerequisite for The Taste of Death if you wait until level 30 you can knock out both of these quests in short order.

What you’ll want to do is go to Markarth first. You can gain access to the Hall of the Dead the first time you find Markarth. The priest is arguing just outside Understone Keep. Talk to him right after the argument for access. Once inside the Hall of the Dead a figure will appear. She will babble about you eating flesh. Just agree to help her clear the cave. In order to obtain Namira’s Ring you’ll need to indulge in minor cannibalism but you will earn your justice shortly.

Once you’ve cleared the location of Draugr, Eola asks you to convince a certain priest for a ceremony, which in Eola-speak is fancy jargon for feast. Either way, go get thoe priest and bring him to the dining room in Reachcliff Cave. Be sure to fast travel to the secret entrance to be sure the priest makes it alive. You’ll find the dining table has a few guests and they may recognize you from Markarth. This is when the quest goes sideways. You can either dine on the priest and earn Namira’s Ring, which grants you increased health and stamina (if partaking in more cannibalism) or you can kill Eola and get a reward. For the sake of this post, we will be eating the dead. Now that you have the ring, you’ll be finishing out your plan, and justice begins now. In my play through I attack and kill all the guests while in werewolf form but keep Eola alive. Maybe have her partake in the slaughter. Now the guests are shop owners or dog trainers so be prepared to lose some commerce. But killing them is worth it. If you commence the slaughter as a werewolf you can earn hearts for werewolf perks. Or just accomplish this goal in whatever fashion you choose and for whatever purpose you desire. 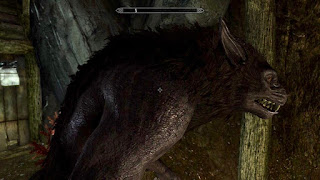 Now onto phase 2 of the double, double cross. Recruit Eola as a follower. She’s a capable spellsword so taking her along for some missions might make justice more fulfilling. However you chose take her to the Sacellum of Boethiah. Complete the ritual Boethiah requires and be sure to answer crudely and selfishly. Now the double, double-cross is complete. Only thing left is to get the unique Ebony Armor. Boethiah requires that only one cultist may live. Follow the others but stop at the top of the steps and watch the loons take each other out. Clean up the remaining survivor. Maybe even indulge Namira with some eating of the dead. Or if you’re a werewolf earn some levels for the next perk. Now off with you to Knifepoint Ridge to get special ebony armor which will poison enemies who are too close.

This is how I complete these two Daedric quests. For me, the priest gets some justice as the mastermind behind his killing is herself killed for the betterment of others. Maybe a little twisted but justified.