Published by LittleWatt on December 5, 2016

When I first began playing Firewatch I wasn’t sure it was going to keep my attention. The opening was filled with onscreen dialog similar to that of old soundless movies. And I nearly put the game away for a later date. And had it not been for its setting in the Shoshone National Forest in Wyoming I think I would’ve put it away. Boy am I glad I didn’t. In fact the setting of a fictional area within Shoshone NF was what drew my interest to the game. Kinda like rooting for the home team even if you don’t like the home team.
Firewatch is a first-person, story-driven mystery. It was developed by Campo Santo and published by Campo Santo and Panic. On February 9, 2016 is became available for Linux, Windows, OS X, and PS4. Later, in September 2016 Xbox One players were able to play. 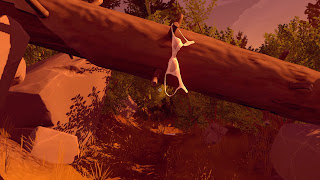 You play as Henry, a man who is trying to avoid a difficult past relationship and start anew. Henry is a new fire lookout in a fictional setting in Wyoming. You engage in dialog with Delilah via radio. And it’s in the dialog that the game shines. At times serious, mysterious, and sarcastic. But it is always engaging and easily holds the attention of the player. It’s almost like a good mystery book in its depth of character and twists.
Fun Factor: Firewatch is certainly engaging enough as a story-driven game to keep the fun going. Even with limited gameplay the game is a wonderful getaway for several hours. FF is 8 of 10.
Replay Factor: Firewatch has plenty of dialog options to warrant a second or even third pass through. And a few secrets are hidden that I easily missed. The adoption of a turtle for example. Firewatch is almost completely devoid of wildlife, which is strange given its setting. RF is 7 of 10.
Story Factor: the story in Firewatch is wonderful, although a bit slow at the beginning. But this is attributed to the fashion of gameplay in the first ten minutes. Once beyond the long beginning reading the player must do the story is fascinating and enjoyable with fully relatable and well rounded characters. And the mystery itself has plenty of possibilities for gamer engagement. SF is 8 of 10. 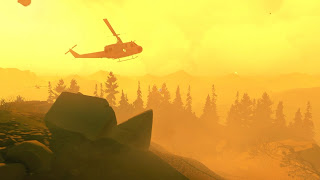 Imagery Factor: now again I don’t separate out the quality or even design of the imagery, rather I use the fully imagery immersion to make the determination in the score. Firewatch possess wonderful imagery, from the forest to shadows to darkness. IF is a 6 of 10.
Overall Factor: a summation of all the scores given against all the scores available. Firewatch scores a 29 of 40. Firewatch losses ground due to lack of forest sounds and minimal gameplay. With the addition of sounds and more complex puzzles, Firewatch could easily score a 35 of 40.
Firewatch is definitely a game to play. Even if you prefer high octane games like DOOM or Uncharted, the story in Firewatch is more than enough to keep you entertained for several hours on a rainy afternoon. It easily makes it into my top 5 games played this year.
(Firewatch gets 5 bonus points for mentioning actual towns and cities in Wyoming.)
The playlist for Firewatch
Categories: bloggingFirewatchgameplaygamersGamingPS4reviewvideo gamesXbox1YouTube