Welcome to LittleWatt Gameplay. I’ll be reviewing No Man’s Sky in this post. The review will be several categories with a 0-10 rating in each category. The numbers will be tallied up at the end for the overall rating.
My how my feelings have changed from my initial thoughts post to this review. But first a little about the game. No Man’s Sky was developed by Hello Games, a small indie group from the UK. It’s a single player exploration and survival game based in a procedurally generated universe where our own solar system doesn’t appear. 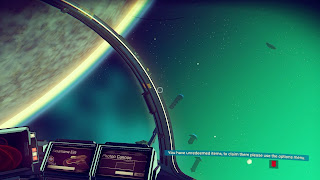 Fun Factor: This is the hardest category for me to rate. I hate to say this game isn’t fun. But at the same time I can’t say this game is barrels of fun, either. No Man’s Sky is a game with a limited audience. That being said, I’m not convinced anyone but severely hardcore fans will find this game overly fun. Scored 3 of 10.
Replay Factor: Once the game’s primary goal is completed, which is apparently reaching the center of the universe or galaxy (something that isn’t quite clear even though the two aren’t synonymous with each other), I would be hard pressed to say the game is replay-able. The mundane, and often arduous, tasks would forfeit any desire to start over and try it again. I would be surprised if even the hardcore fans would start again. Scored 1 of 10.
Story Factor: Well there isn’t much story. The game allows you to learn other languages but that isn’t really what I would consider story. This game is completely about an individual exploring planets and moons and mining necessary consumables to survive. Even the alien interactions are solely for the purpose of reaching a goal. Scored 1 of 10. 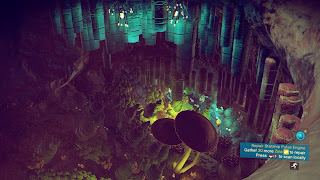 Imagery Factor: Now this is where the game shines. Although much of the imagery in the game is the same, regardless of what planet you’re on, the images never get too old. During my gameplay, I found the images amazing even though they were rather cartoonish. I found myself fascinated by the color schemes, the blues were amazing, the greens were lively, and the images of each planet’s atmospheres were inspiring. No matter how gloomy the planet was, if you found a cave filled with colors, you felt immediately warmed. Scored 6 of 10.
Overall Factor: The score here won’t be great. That isn’t to say the game is as bad as the score, though. I tried to base each score only on its respective merits, and in doing so, the cumulative result will mark the game much lower than it really is. I do believe there will be a special group of consumers who find the game breathtakingly amazing. And for those people this review will be blasphemy. But I’m not writing this review to please any one person or groups of people. Scored 2.75 of 10.
Last Minute Gripes: The game lacks any kind of real action. Sure there are moments you have to blast some predators or angry drones. And at times fighting off pirates is a must. Maybe even engaging in a full space battle is an option, but it’s relatively limited. The opening to the game was incredibly long and drawn out, and this alone could have easily turned players off the game. That’s not to say other games don’t have long openings, but the opening to No Man’s Sky just felt excessive. Maybe it’s because you are so alone, which is kinda the point. The game aims for you to feel small and insignificant, and for that it does a magnificent job. Unfortunately for me that vast emptiness was more than I could tolerate and I’ve shelved the game. But since it does make you feel small so well, I’m going to give the game rating two extra bonus points. Score it 4.75 of 10.
Categories: blogginglittlewattgameplay.comNoMansSkyPS4reviewvideo games